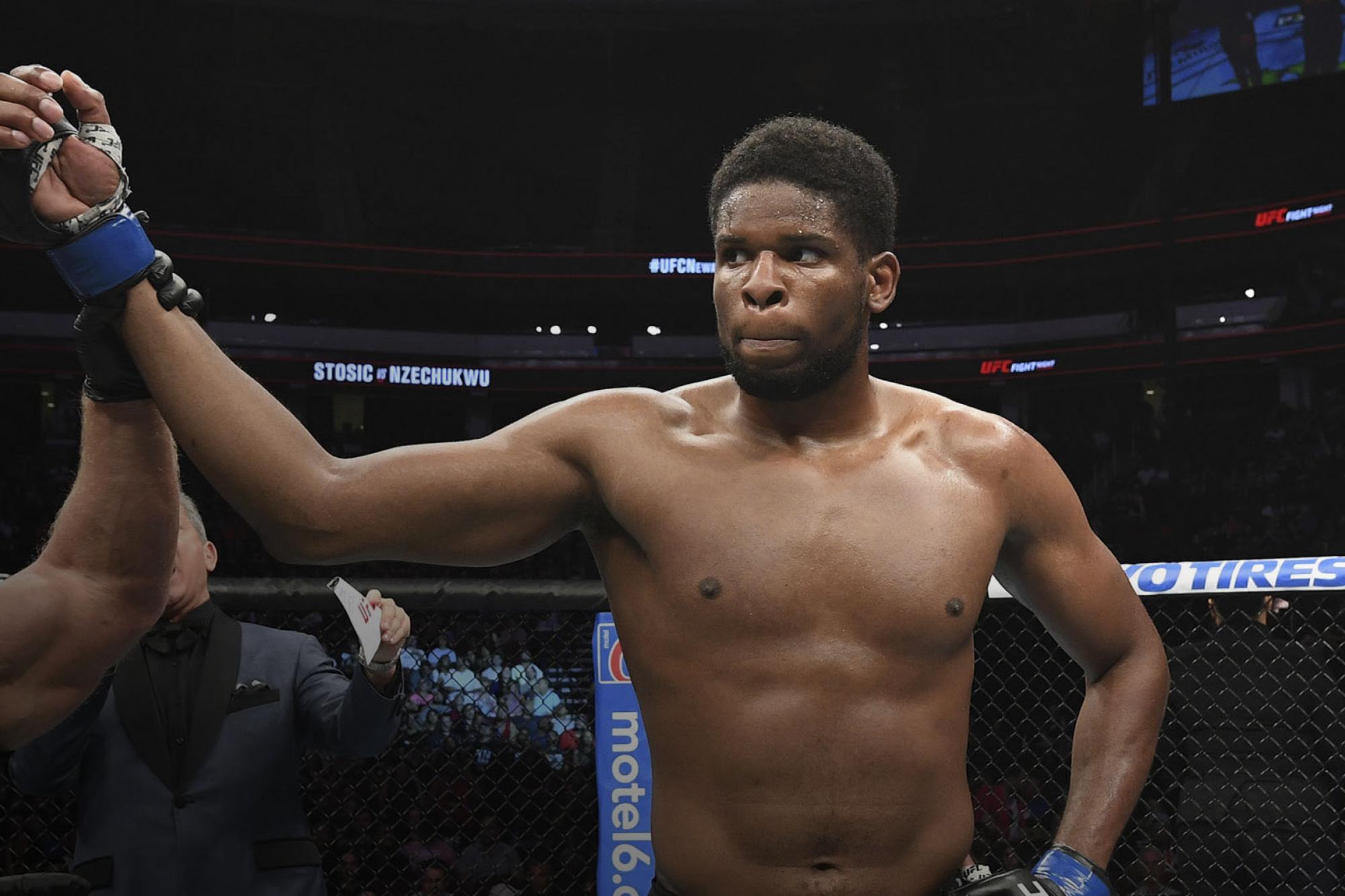 Sitting on the other end of the phone in Dallas, Texas, Kennedy Nzechukwu doesn’t sound like the same person I talked to before each of his first two UFC appearances.

The first of those fights came nearly two years ago, when the Fortis MMA product made his promotional debut opposite Paul Craig. For 13 minutes and change, the 26-year-old UFC freshman dominated, but in the final minute of the contest, the Scottish submission ace connected on a triangle choke to secure the finish.

The second bout came four months and a handful of days later in Newark, New Jersey against Darko Stosic, with the light heavyweight prospect winning all 15 minutes of the contest to secure his first UFC win.

His third bout comes this weekend in Las Vegas, on the UFC 259 undercard, where he takes on fellow Contender Series graduate Carlos Ulberg, ending a 17-month hiatus largely caused by a torn ACL and the subsequent rehabilitation process.

As we exchange pleasantries and begin our third interview in as many fights, it’s immediately clear that Nzechukwu is no longer the young kid filled with dreams making his way as a UFC prospect; he’s now a grown man, chomping at the bit to return to the Octagon and finally show the world his full potential.

“At first, there are all the nerves and everything; it shouldn’t be that way, but it is,” began Nzechuwku, without a hint of the shyness and hesitancy that colored his words and altered his tone in our earlier conversations. 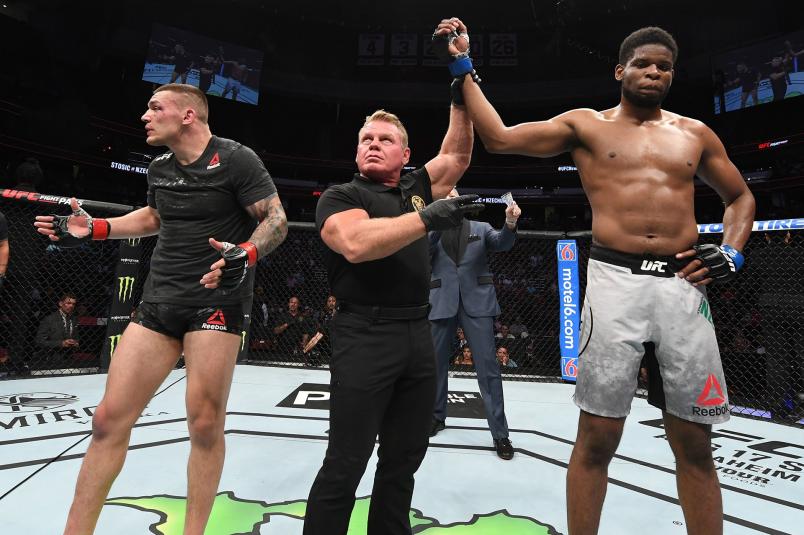 Following his debut, he admitted that walking out into an arena filled with thousands of people in Philadelphia threw him for a loop.

“Now I’ve got that cage time, and everything changed,” he said. “As a kid, getting into the UFC was always the dream, so when you actually get there, it’s mesmerizing and throws you off a little bit, but it’s nothing different — it’s the same job; you’ve just got to go in there and cash in.”

Like anything in life, there is no substitute for experience, and logging a couple trips into the Octagon and getting a win under his belt has certainly done Nzechukwu a world of good, but it’s not the only thing that has contributed to his growth and maturation during his absence from UFC cage.

Even before he reached the biggest stage in the sport, the young fighter shouldered an incredible load, serving as the primary caregiver for his mother, who suffers from amyotrophic lateral sclerosis, more commonly referred to as ALS or Lou Gehrig’s disease, and his brother, who is on the Autism spectrum.

That’s a lot for anyone, yet alone a twenty-something simultaneously trying to chase his dreams of being a professional fighter and making it to the UFC.

“That Paul Craig fight, that was his first fight in the UFC, and you look at how far Paul Craig has went and you think, ‘Well maybe Kennedy isn’t that bad?’” offered Sayif Saud, the head coach at Fortis MMA who has shepherded Nzechukwu’s journey from a novice first walking into the gym to the regional circuit and onto the UFC. “He beat Darko, he’s 1-1, but everybody gave him so much grief online — like he was the worst person in the world.

“The other thing is, his mom’s situation puts so much stress on him and there is so much on the line when he goes in there, I think it has f***** him up a couple times,” continued Saud. “It’s been a really hard balance for him. He’s her primary caregiver and the man of the house; it’s not easy.

“But I think Kennedy has matured a ton since the injury,” his coach added. “He had to go through that adversity, and I think that made him appreciate and miss fighting, and I think he’s got a renewed passion and love for everything. Mentally, he’s the best he’s ever been and although he’s dealt with a ton of adversity, I think he’s grown into that.” 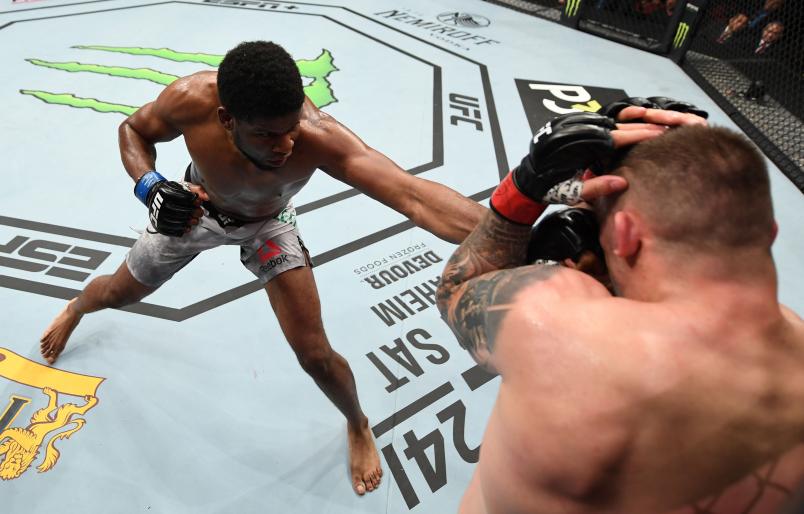 “He’s grown into that” is a tremendous choice of words from Saud, as a quick scroll through Nzechukwu’s Instagram feed shows that he’s physically matured a great deal in his time away as well.

Still rocking the chin-strap beard and short Afro he sported during his twin Contender Series appearances and first two forays into the Octagon, the 28-year-old, who was born in Imo State, Nigeria, has filled out his six-foot-five-inch frame, adding a considerable amount of muscle to transform from a long, wiry young man into a powerful, imposing looking man.

“I’ve focused more on my size,” he said, laughing when I reference a picture of him and Mohammed Usman, the older brother of current UFC welterweight titleholder Kamaru Usman, a gigantic human being that doesn’t look as uncommonly large when stationed next to Nzechukwu. “I know I have conditioning, but the size was a big thing to add, so I added more muscle, trained harder, and I feel great.

“I’ve been working on my skills too to add upon my size so that I can make it all work in there in the Octagon,” he added. “And I’ve got to work on my mindset and get myself focused and tuned in.”

That, more than anything, is the key for Nzechukwu and everyone else as far as Saud is concerned.

“When you get in there, it’s 90 percent your mind,” began the highly respected coach. “Everybody is in shape, everybody is trained, everybody has worked hard, and all around the world there are a lot of good teams, but it’s about getting your mind right and being ready to step up in those moments and make the right decisions.

“He’s fought well — he’s 1-1 and Paul Craig is a ranked guy now — but he hasn’t had smooth fights,” added Saud. “I think he has so much pressure on him and now that 18 months have passed, he’s in a spot mentally where he can…”

Saud pauses, trying to find the words to express what he truly feels about the returning light heavyweight.

“If Kennedy gets going, he’s got an 83-inch reach, he doesn’t get tired, he’s got a great chin, and he’s got tons of power,” he said in the tone people use when they feel no one is going to believe what they’re saying, even though they know what they’re saying is absolutely true. “If you saw him in the gym, your mouth would drop. 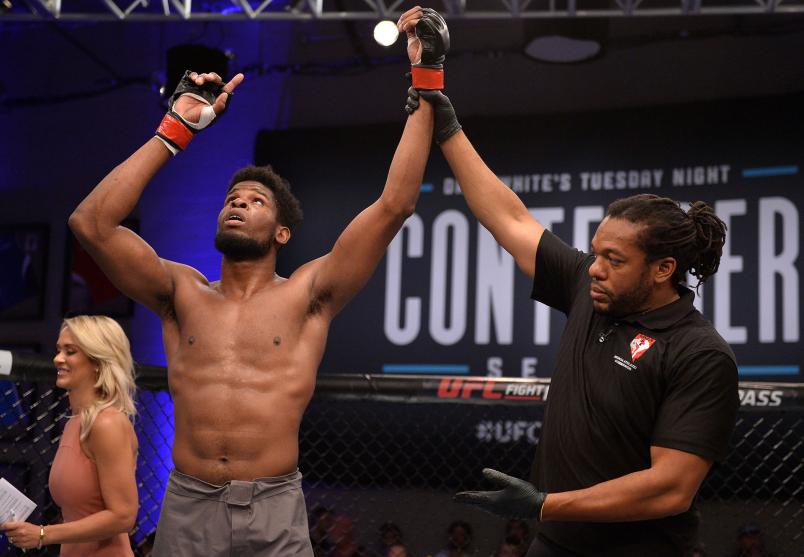 I sound like a crazy guy but trust me.”

I trust Saud, so I don’t need his assurances before Nzechukwu offered his own version of what he coach offered.

“I’ve always known what I was capable of doing, even before I got to the UFC,” began Nzechukwu, apologizing for being boastful, but showing no inclination towards backing away from his words. “Every sport I played growing up, I was always one of the best, and I was thinking, ‘Why can’t I break through with this sport?’

“I was grateful (to get my first victory), but it was nothing close to my potential,” he added. “I’m a way more dangerous and scary guy when I’m tuned in; that was 20-30-percent of what I’m capable of doing, but it’s all about experience.

“I’m hopeful that I can get in there and perform at 100 percent and show people what I’m really capable of doing.”

Heading into his return on Saturday night, there will be plenty of people that simply look at his resume, see who he’s faced and the results he earned, and believe they know enough to form an opinion about who Nzechukwu is, what he can do inside the Octagon, and how his fight with the highly regarded City Kickboxing representative Ulberg will play out.

Those people will be wrong.

Regardless of the outcome of Saturday’s contest, Nzechukwu is more than his resume indicates, and far removed from the unsure, inexperienced young man that logged a pair of appearances inside the Octagon in 2019.

I can tell just from the way he sounds on the phone, and the Instagram photos and insights from his coach support my hypothesis.

How To Watch UFC 259 In Your Country

Plus, the man himself has no problems acknowledging either.

“I’m calm and collected now, ready to go out there and obliterate anyone in my way. It’s all business now.”