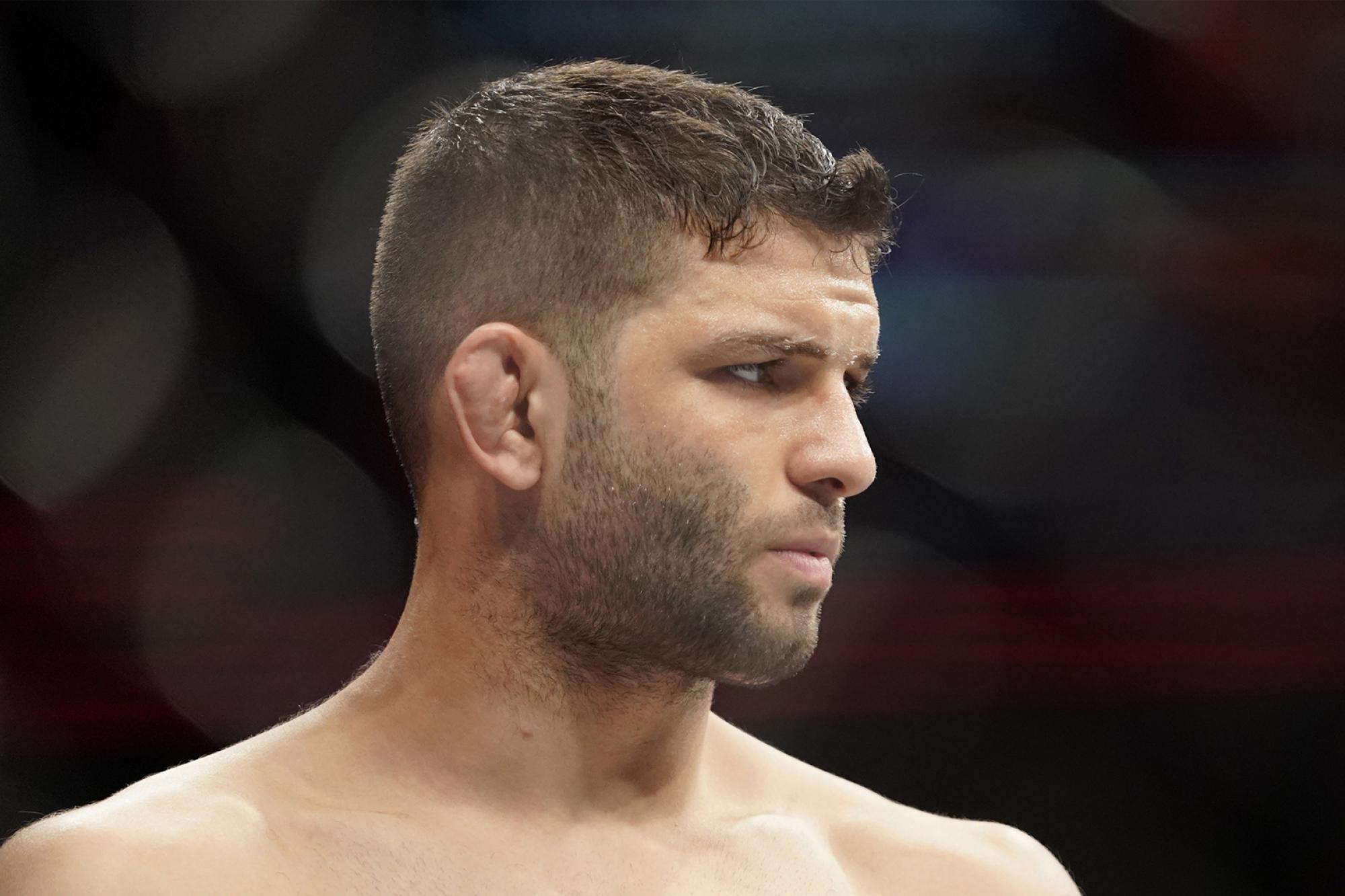 Thiago Moises Feels The Improvements In His Game From Fight To Fight, Now He Plans To Show Those Improvements Against Alexander Hernandez At UFC Fight Night: Rozenstruik Vs Gane
By E. SPENCER KYTE, ON TWITTER @SPENCERKYTE • Feb. 22, 2021

Thiago Moises lost as many fights in his first 10 months on the UFC roster as he did over the first six years of his professional career, and the Brazilian lightweight knows he’s better because of it.

“I grew so much after those fights,” he said of his unanimous decision losses to Beneil Dariush and Damir Ismagulov, which bookended his first UFC victory over Kurt Holobaugh. “I think those fights were very important in my career because I could fix — not mistakes, but I could see what I could do better in my training and my personal life in order to compete at a higher level.

“Those fights made me a much better fighter.”

The proof of that was evident last year, where the American Top Team representative earned a pair of victories over respected veterans that established him as one of the top younger talents to watch in the loaded 155-pound weight class.

In May, he dropped the opening round of his clash with Michael Johnson but turned the tables on the former Ultimate Fighter finalist in the second, snatching up a victory with an Achilles lock that ranked as one of the top submissions of the year. Five months later, he edged out Bobby Green on the scorecards. 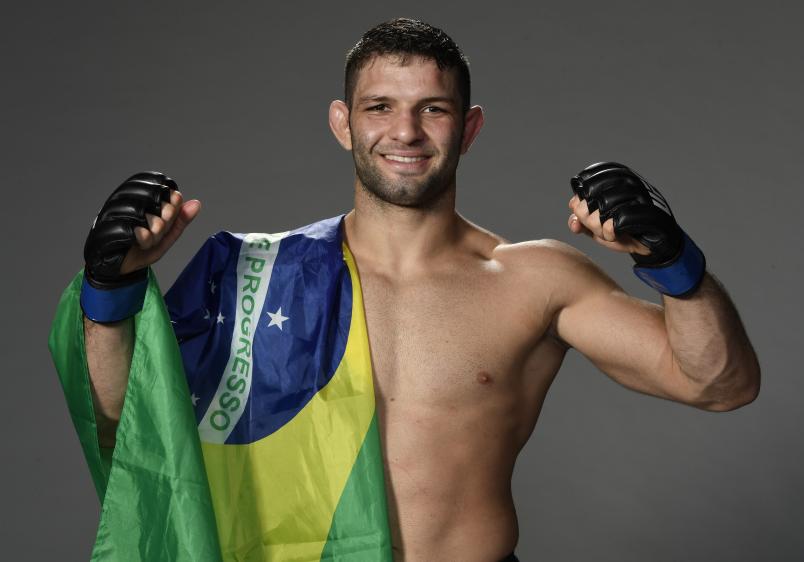 Thiago Moises of Brazil poses for a portrait after his victory during the UFC Fight Night event at UFC APEX on October 31, 2020 in Las Vegas, Nevada. (Photo by Mike Roach/Zuffa LLC)

“It was very important for me to get those big wins against two veterans of the sport,” said Moises, who started turning heads on the regional circuit as he rose to the top of the lightweight ranks under the RFA banner. “I’m feeling great. I’m feeling very confident for this year, and I want to keep the momentum going and increase my winning streak even more this year.”

Now 14-4 overall and with momentum on his side, Moises is poised to make his 2021 debut this weekend in a showdown with fellow lightweight up-and-comer Alexander Hernandez. While the bout that doesn’t carry immediate divisional ramifications, it feels like one that could prove to be a pivotal contest for each of the hopefuls as they look to take another step forward in their respective careers.

“I’ve been watching Alexander Hernandez since he got to the UFC,” Moises said of his adversary this weekend in Las Vegas, who burst onto the scene with a stunning upset win over Beneil Dariush a shade under three years ago. 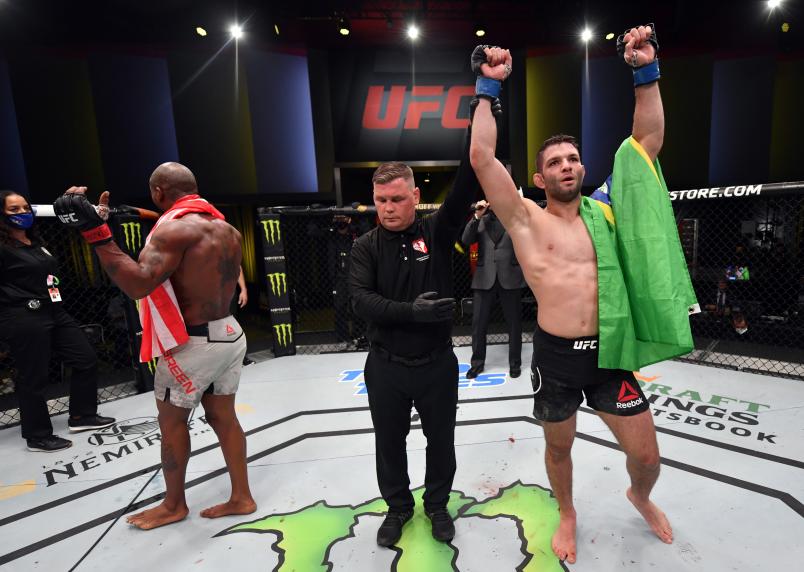 Thiago Moises of Brazil reacts after his decision victory over Bobby Green in a lightweight bout during the UFC Fight Night event at UFC APEX on October 31, 2020 in Las Vegas, Nevada. (Photo by Jeff Bottari/Zuffa LLC)

Because he’s someone that was making waves and winning major titles on the regional circuit several years ago, it’s easy to lose sight of the fact that Moises is still only 25 years old and only now starting to creep towards his athletic prime.

In addition to having a wealth of in-cage experience already under his belt, the well-rounded Brazilian has the added benefit of having quite literally grown up working in one of the most talent-rich training environments in the sport.

“I grew up at American Top Team; it’s my second home,” he said of the South Florida outpost that is home to a host of outstanding talents, especially in the lighter weight classes. “I got there when I was 17 years old and I’ve been sparring UFC fighters since then.”

They say that “iron sharpens iron” and you’re only as good as the people you surround yourself with, and for the last eight years, Moises has surrounded himself with an all-star cast of coaches and training partners, including Edson Barboza, Renato Moicano, Gleison Tibau, Nik Lentz, Thiago Alves, Kyoji Horiguchi, and Dustin Poirier. 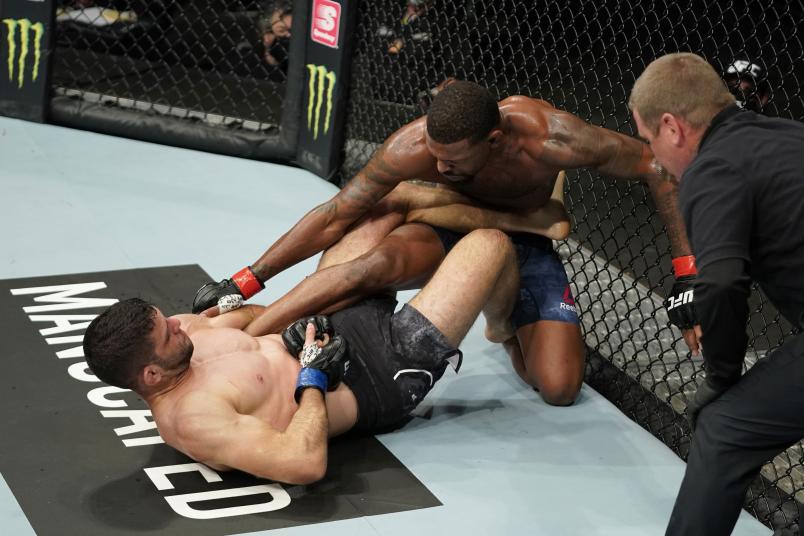 Thiago Moises of Brazil submits Michael Johnson in their lightweight bout during the UFC Fight Night Event at VyStar Veterans Memorial Arena on May 13, 2020 in Jacksonville, Florida. (Photo by Cooper Neill/Zuffa LLC)

Every round, every session working with the cadre of champions, contenders, and steady veteran hands that assemble in the American Top Team facility each day is surely challenging, but they have also instilled a different level of confidence in Moises than one gets when you aren’t necessarily exposed to the work ethic, dedication, and commitment exhibited by fighters like Poirier on a daily basis.

“I’ve been competing my whole life,” continued Moises, who started training in jiu-jitsu at the age of eight. “I was 17 and sparring guys like Gleison Tibau, Dustin Poirier — big UFC fighters — so it’s a lot of experience.

“I grew up surviving in this jungle day-by-day.”

That training environment and his tandem victories in 2020 have the Brazilian chomping at the bit to get back into the Octagon to begin his 2021 campaign, one that he hopes affords him multiple opportunities to compete and enough victories to have a number next to his name by the time Christmas rolls around once more.

“I want to have four fights this year, and I want to be in the Top 10 by the end of the year,” he offered.

Both are lofty goals and the same hopeful ambitions shared by many of his contemporaries, likely including his opponent on Saturday night, Hernandez, who rebounded from a first-round stoppage loss in his first appearance of 2020 with a similar result in his favor late in the year.

But with a pair of quality wins over veteran competitors under his belt from last year and a victory over the highly regarded Hernandez in his sights, the confident Brazilian is ready to take another step forward in his career and show people what he’s capable of inside the Octagon.

“I’m young, but I’ve been in this game for a few years. I know my potential and I know what I can do.

“I know that I’m one of the best fighters in the world, and I’m going to prove that fight-by-fight.”