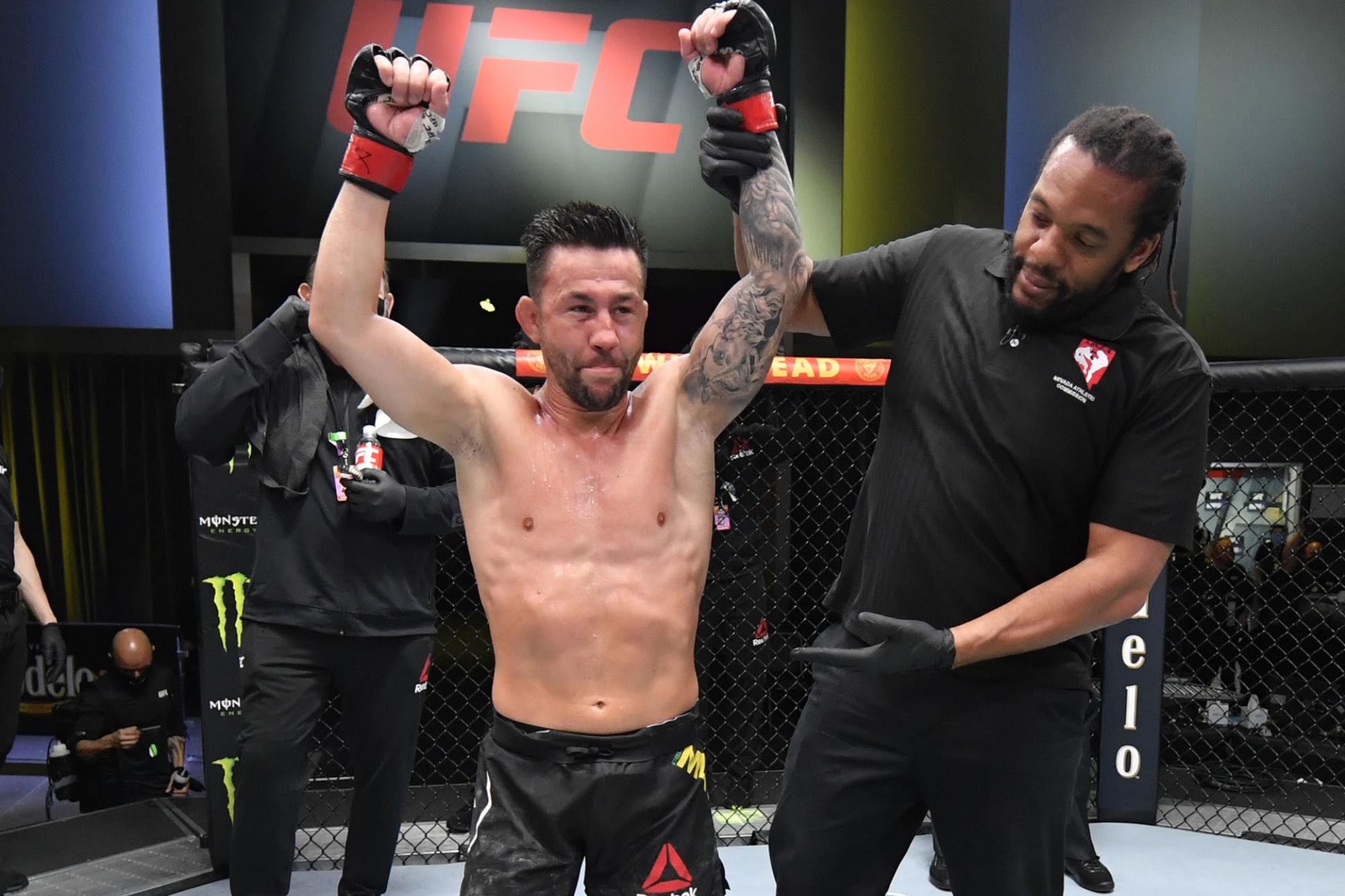 With UFC Vegas 20 Now In The Books, We Look Back At The Biggest Winners
By Thomas Gerbasi, on Twitter: @TGerbasi • Mar. 2, 2021

Saturday’s UFC Vegas 20 event is in the books, and now it’s time to go to the scorecard to see who the big winners were at the UFC APEX.

I noted this in my fight report, but it bears repeating again. With no fans in the UFC APEX, you could hear the bombs landing from the fists and feet of Pedro Munhoz and Jimmie Rivera, showing just how good these bantamweights are and just how much a win meant to them. On Saturday, it was Munhoz evening the score with Rivera in their rematch, and while the win was much needed after back-to-back losses to Aljamain Sterling and Frankie Edgar, more importantly it cemented Munhoz not just as an elite 135-pounder, but a must see on fight night, win, lose or draw.

There is no award for best poker face in the Octagon, but if there were, Thiago Moises would have already locked it up. Whatever Alexander Hernandez threw at him on Saturday night, Moises would calmly fire back, his expression never changing until late in the final round when he began calling for Hernandez to stand and trade with him. It wasn’t what you would expect from the Brazilian Jiu-Jitsu black belt, but he was in the zone and feeling it, and now he’s got three straight wins in his back pocket heading into the spring.

No, Ciryl Gane did not produce fireworks in his main event against Jairzinho Rozenstruik. There will be nights like that for a developing heavyweight. But the unbeaten Frenchman did shut out one of the most dangerous fighters in the game, which was impressive in its own right, and let’s face it, if he can get through 25 minutes without having to dig deep or get into a firefight, a win’s a win, and it takes two to put on a Fight of the Year type bout. Remember Francis Ngannou vs Derrick Lewis? That was a fight expected to be Armageddon in short pants but wasn’t. Then look at what both heavyweights went on to do. Expect that pattern to be following by both main event combatants.

You can tell the type of fighter he is just by his reaction to his UFC debut win over Vince Cachero. Despite putting in a dominant effort that earned him a Performance of the Night bonus, Lawrence looked like he just lost a shutout decision when doing his post-fight interview. That’s a competitor right there, and if he puts together the type of performance HE wants us to see, that’s going to be something.

Under the radar on the 2020 scorecard of unexpected happenings had to be the resurgence of Alex Caceres, and “Bruce Leeroy” moved his winning streak to four with a victory over Kevin Croom in his first bout of 2021. In nearly a decade on the UFC roster, he’s never hit heights like that (okay, a no contest against Kyung Ho Kang would have him with a five-fight streak if he didn’t test positive for marijuana, but the official record stands), and if he gets a ranked opponent in his next bout and aces that test, well that would be one of the best stories of this year.