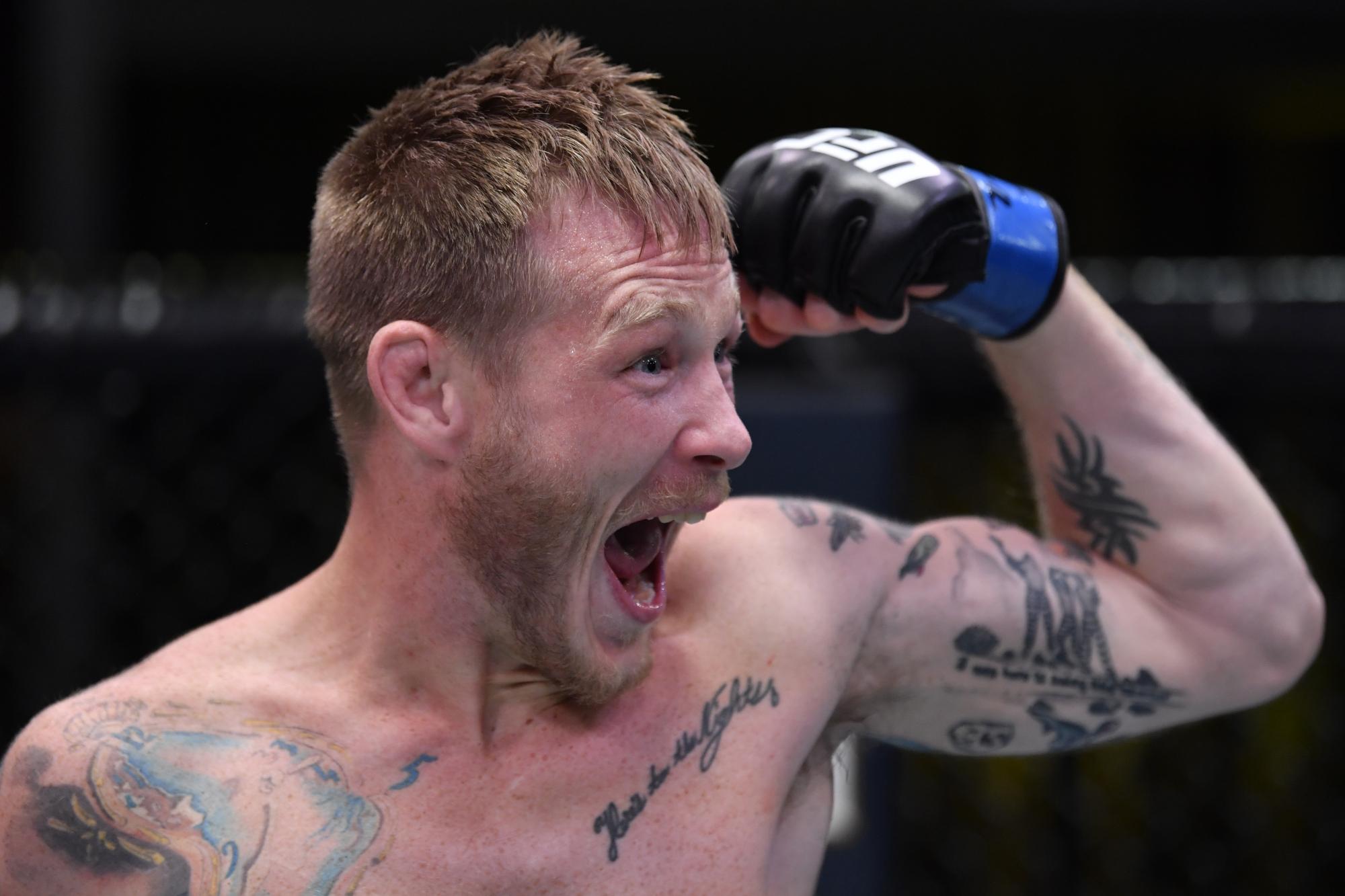 Kevin Croom's Smile And Love For Life Go Beyond The Octagon, Where The UFC Featherweight Continues To Shine
By THOMAS GERBASI, ON TWITTER @TGERBASI • Feb. 24, 2021

It’s not the easiest part of the job, but sometimes it’s necessary to ask the hard questions. Thankfully, UFC featherweight Kevin Croom is game for whatever I throw at him, so I ask.

Are you the happiest man in mixed martial arts?

“Oh man, most definitely,” Croom says without hesitation. “I am, without a doubt. I absolutely love my life, I'm living the dream, I'm blessed to be able to get up and do something I love every day. I feel like my mission in life is to show the world that you don't have to be a hard, mean a**hole to be a savage. MMA has saved my life. It made me a better person. I used to be toxic before I found it, and somehow it gave me a life to where I can be nice and smile and be happy and then go f**k somebody up. It's a beautiful thing and I just love it.”

One read of a Croom interview, a listen to him on a podcast or a visit to his Instagram page and you’ll see that he’s not lying. Yet for all the smiles on that page (kevincroom_ufc), the key is that if you go there, especially if you look at the photo from January 23 which has Croom wearing all colors of the rainbow in one outfit, you’ll smile too. That’s a rarity in this day and age, where snark and nastiness are the got-to attitudes for so many. Is it safe to say that we need more Kevin Croom in the world?

“I agree, and I'm gonna give it to the world; I got enough to give.”

I believe him, and so do the fans that became diehard followers as soon as his UFC debut against Roosevelt Roberts ended in September. It wasn’t a long fight, only 31 seconds, and the short-notice submission win was later overturned to a no contest after Croom tested positive for marijuana, but anyone who saw the bout and heard of the 33-year-old’s long road to the Octagon didn’t care about the particulars. The Missouri native had arrived, and it was a life-changing moment for him in many ways.

“I have a little bit more money in my bank account, I'm not stressed out about my bills and a couple more people know my name,” said Croom of how life has changed in the last five months. “But other than that, everything's the same. I wake up, I go to the gym, I love my life. The only thing that really happened with the fight besides getting a little bit of extra money is now I know I've been right.”

He didn’t always know that, though he had his suspicions that he was made to be a UFC fighter and someone with the potential to crossover and become a star. And even when there were doubts, he kept looking in the mirror and telling himself that he was going to make it. 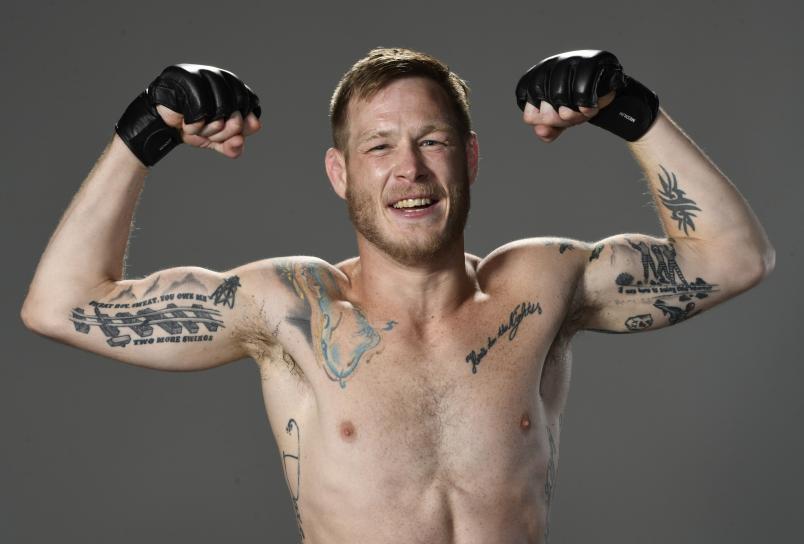 Kevin Croom poses for a portrait after his victory during the UFC Fight Night event at UFC APEX on September 12, 2020 in Las Vegas, Nevada. (Photo by Mike Roach/Zuffa LLC)

“You're something, you were born to be a star, let's go.”

Those mantras kept him motivated when all signs pointed to “no.”

There were two stretches when he lost three of four fights, times when the big win didn’t happen, and when life just got in the way of what he wanted to accomplish in MMA. Then when the whispers around him turned to shouts about him looking for a new line of work, he didn’t quit; he just dug in and prepared to give it another go.

“I knew that I hadn't quite shown what I was capable of,” said Croom, a pro since 2009 with 34 fights under his belt. “Even when I messed up and I lost and I was down in the dumps and I was crying, I knew. And even when I had the people I love talk to me and say, 'Hey man, maybe it's about time to hang these gloves up,’ I knew that I was capable of so much more and I just hadn't quite figured out how to tap into it.”

There were some believers, though, from his coaches and team at Glory MMA to close friends and family members who knew he had what a took to get to the big show.

“I have always said that I'm rich in relationships and those people have kept me going. I'm a lucky man, I'm very blessed.”

Those relationships kept Croom optimistic, and that circle is all he needed to move forward. That and the willingness to do whatever it took to get his shot. 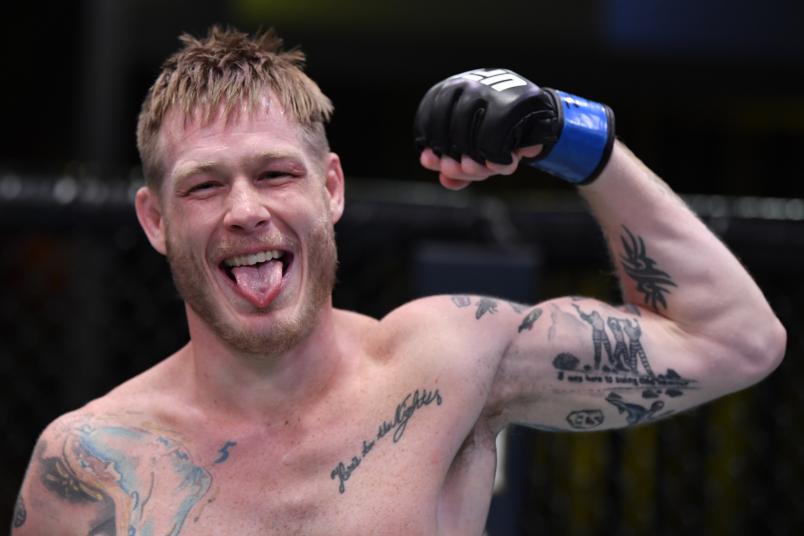 Kevin Croom reacts after his submission victory over Roosevelt Roberts in a lightweight fight during the UFC Fight Night event at UFC APEX on September 12, 2020 in Las Vegas, Nevada. (Photo by Jeff Bottari/Zuffa LLC)

“I didn't listen to those people,” he said. “I was either gonna be an alcoholic construction worker for the rest of my life or chase my dream. I didn't come from a lot, I never had a lot, but I put everything in this game, and I knew it was investing in myself. So if I gave up, I literally put all of my investments in this. The only thing I could do is work with my hands. I like to work with my hands, and I do enjoy it, however, that's not the life for me. I was made for this. I was made to knock motherf**kers out and look good for the camera.”

Following a 2019 loss to John Teixeira, Croom finally put it together, winning three in a row, his longest win streak since 2014. But as Fight Week for the September 12 UFC Fight Night card in Las Vegas commenced, Croom was wondering how he was going to pay his bills. He got his answer a couple days later when he was brought in to replace Matt Frevola against Roberts. It was a roll of the dice, but he won big.

When it was over, all Croom could do was smile. It was one of the feel-good stories in the sport last year, and while even the doubters had to agree, they still don’t fully fathom what it took him to get here.

“I don't think a lot of people can get it unless you've experienced it,” said Croom. “Even the people who've known me my whole life, they kinda get it, but I'm only an inspiration because I made it, finally. Otherwise, I was just some guy that nobody knows. 'Yeah man, he's still doing that crazy s**t.' Now that I made it, they're like, 'I know you had it in you.' (Laughs) I don't know if they did. It's nice to hear that, but until just a little while ago, I was the crazy guy who's still doing it. Obviously, there are some people who do get it, but those are the people who have been around and seen the blood, sweat and tears. I've lost relationships because of this s**t, I've literally given everything for it. It's like the iceberg. People only see a little bit; they only see the success now. But they don't understand all the broken hearts and all the nights of wondering and fighting with myself.” 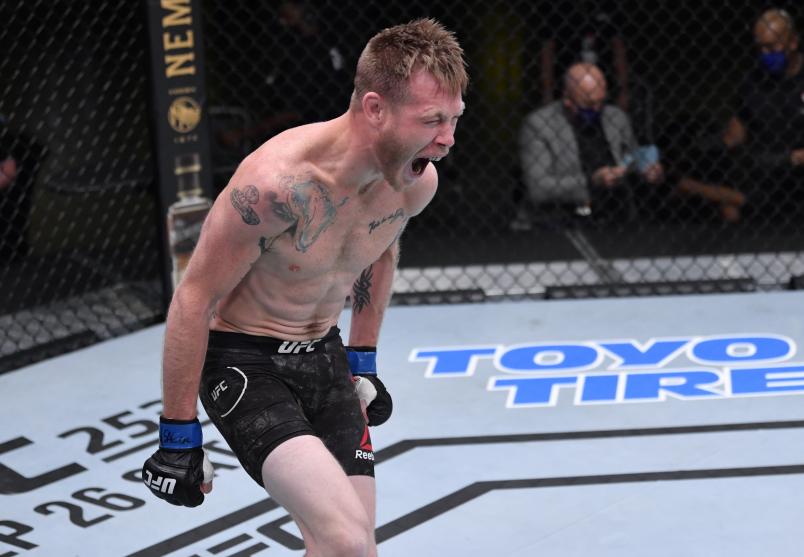 Kevin Croom reacts after his submission victory over Roosevelt Roberts in a lightweight fight during the UFC Fight Night event at UFC APEX on September 12, 2020 in Las Vegas, Nevada. (Photo by Jeff Bottari/Zuffa LLC)

Maybe they don’t need to, but they should, because in a world where giving up is the easiest thing to do, and that’s acceptable to some, Croom’s story is a reminder that continuing to move forward is a viable – and ultimately more rewarding – option.

“They don't understand having a girlfriend that you think you love and she kinda gives up,” Croom said. “Obviously, everybody has trouble paying bills, but they don't know working an eight-hour day in construction and then going to the gym and coming home and still being broke. All that stuff. A few years ago, I was going through the roughest time of my life and I remember telling myself, 'Life is testing me right now. I am being tested.' Man, I'm so thankful I found the strength to keep going because I am literally the definition of the American Dream. I came from nothing and I worked for everything and I got it.”

Order UFC 259 Blachowicz vs Adesanya For Any Device Here

It's time for another tough question for a tough man. After all this heartache to get here and the emotional release of nailing it in the biggest fight of his career, how does Kevin Croom possibly get up for his second UFC fight this weekend against Alex Caceres?

“I'm just getting started,” he smiles. “I will be a superstar, I will be a household name, I will be a fashion icon. I am me and the world needs me. The world needs an authentic, real person right now. You can see me and know that I'm real. I'm genuine and I love this. This is my life. And I think this fight means that the UFC is trying to push me. It's a great fight, I just had an incredible debut, now I get to take out somebody with a name. And I'm gonna take all his fans and make them my fans and I'm gonna be ranked by the end of the year.”

So, no problem, then?

“Nothing in life worth having comes easy,” he said. “If it was easy, guess what, it wasn't worth getting.”