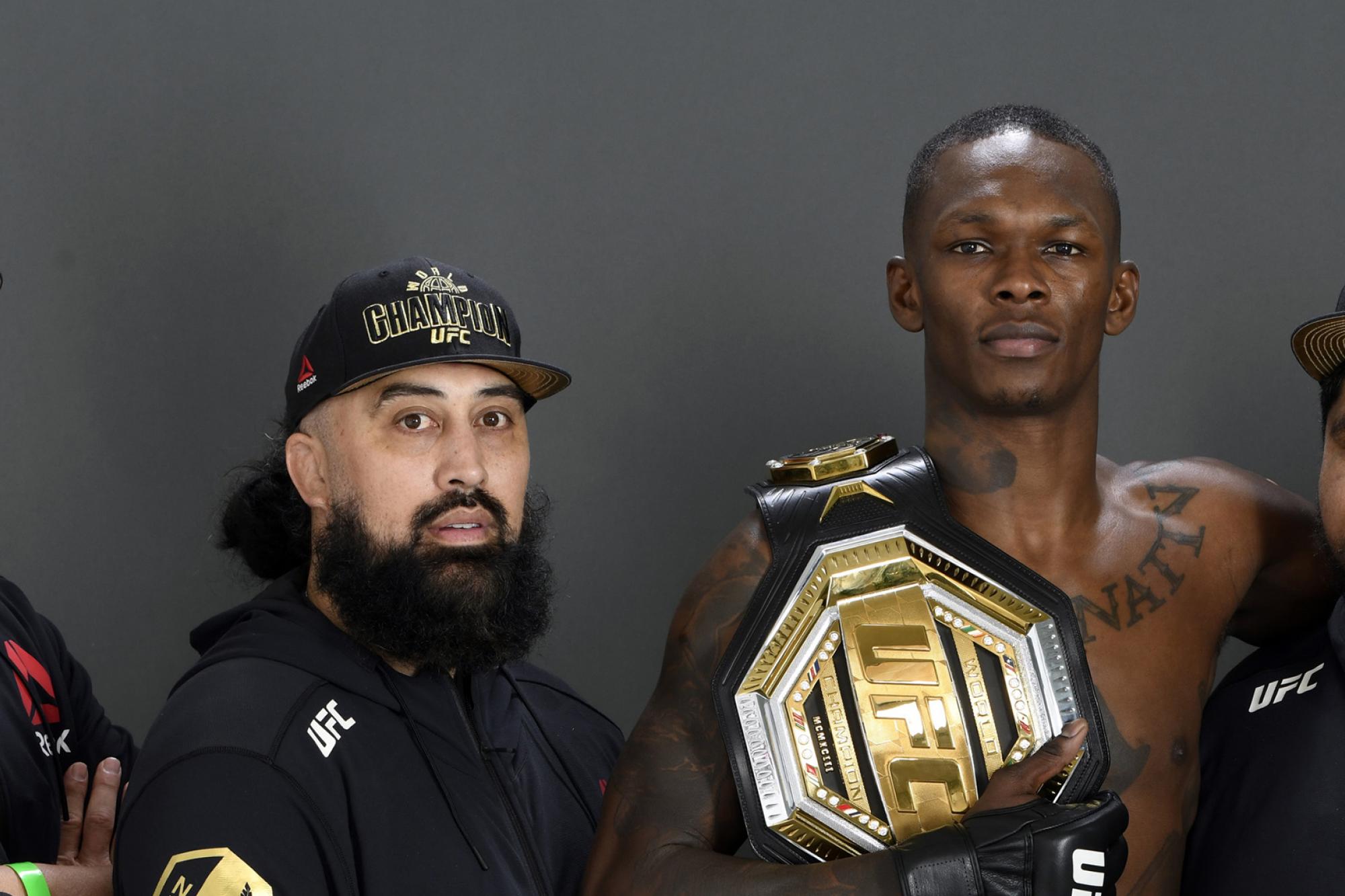 Inside The Mind Of City Kickboxing: Eugene Bareman

It felt like it almost came out of nowhere, but once head coach Eugene Bareman and his athletes at City Kickboxing grabbed momentum in the UFC, there was no looking back.

CKB started stacking events with multiple fighters from the gym, developing a formula to generate the type of environment they wanted for training camp and for fight week. UFC standouts like Shane Young, Kai Kara-France, Brad Riddell, Dan Hooker, featherweight champion Alexander Volkanovski and middleweight champion Israel Adesanya were frequently seen together on fight cards and this formula led to massive success, with CKB often leaving the arena with three wins on the evening.

“Having three guys on the card, that’s one of the secrets to the success,” Bareman told UFC.com. “People don’t understand the environment that it creates in the gym. It’s so important for that atmosphere for the seven days before the fight and for the training.”

It happened at UFC 234 when Israel Adesanya defeated Anderson Silva in his first PPV main event and it happened again at UFC 243 when Adesanya knocked out Robert Whittaker to claim sole possession of the UFC middleweight title. Then CKB scored another 3-0 night at UFC Auckland last February when Hooker beat Paul Felder in a Fight of the Year candidate. 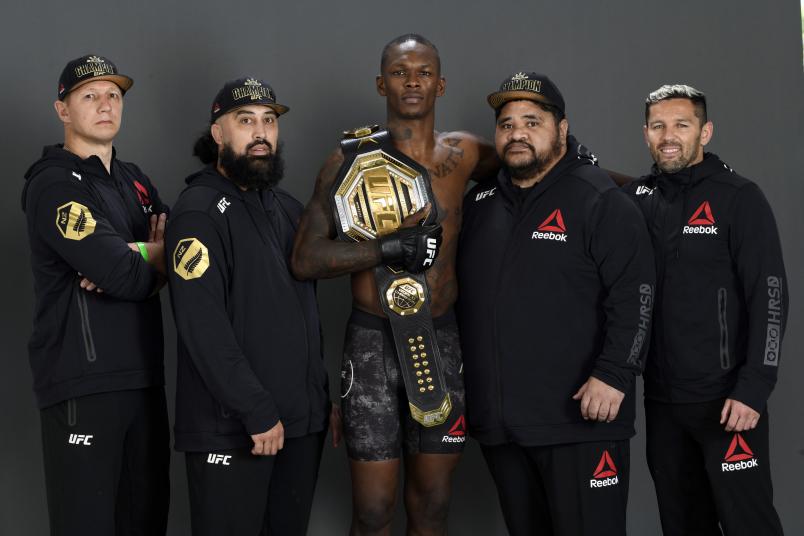 The concept of stacking athletes from the gym on the same events was part of Bareman’s strategy to build momentum and it’s how he plans to approach events going forward.

“Israel’s worst fight was the fight with Yoel Romero, and he had no teammates on that card. We are a team, and we knew heading into all the fights after that we wouldn’t make that mistake again,” said Bareman. “We understand the power of having positive people with similar goals and mindsets. That’s why these guys are so special and it’s a big part of our success.”

That brings us to this weekend, where CKB will have three of their warriors competing at UFC 259. 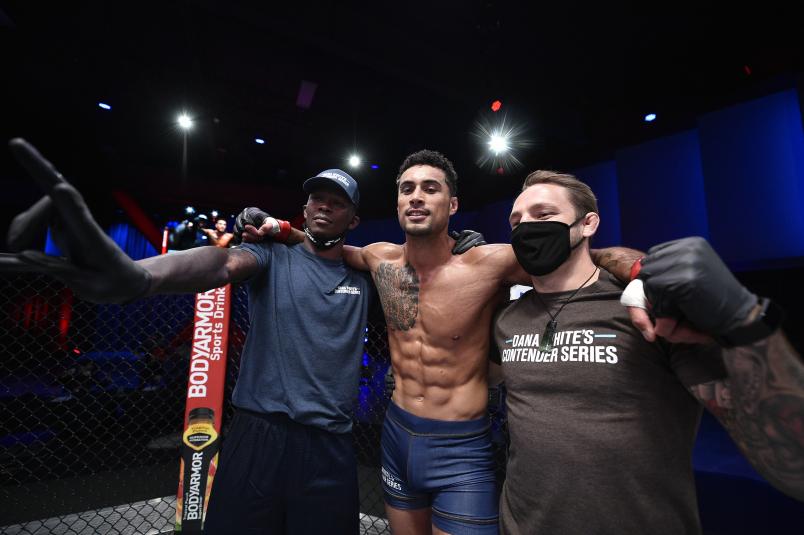 Bareman is excited for MMA fans to get to see more of Ulberg, who he considers a “super athlete” and a true student of the game. He believes that the 30-year-old light heavyweight is going to open a lot of eyes with his performance against Nzechukwu.

“Carlos is kind of a quiet well-mannered lad until he gets under those fight week lights. That’s when you see more of him and see that he has the star power to hit the switch to separate himself from everybody else,” said Bareman while discussing the undefeated prospect. “He has the title of being the hardest kicker in the gym, which amongst a gym full of great kickboxers is a prestigious title to hold. People haven’t seen that side of his game yet.”

RELATED: Carlos Ulberg Is All Smiles Ahead Of His Debut

And despite his impressive physical attributes, it’s Ulberg’s mental game that impresses Bareman most.

“What makes him special is how inquisitive he is and the enthusiasm and desire to learn that he brings to the gym,” said Bareman. “He absolutely latches onto the guys and tries to draw information and energy from the big guys. The great thing about Carlos is that a true martial artist should explore what someone says and then explore it for themselves. He definitely does that.” 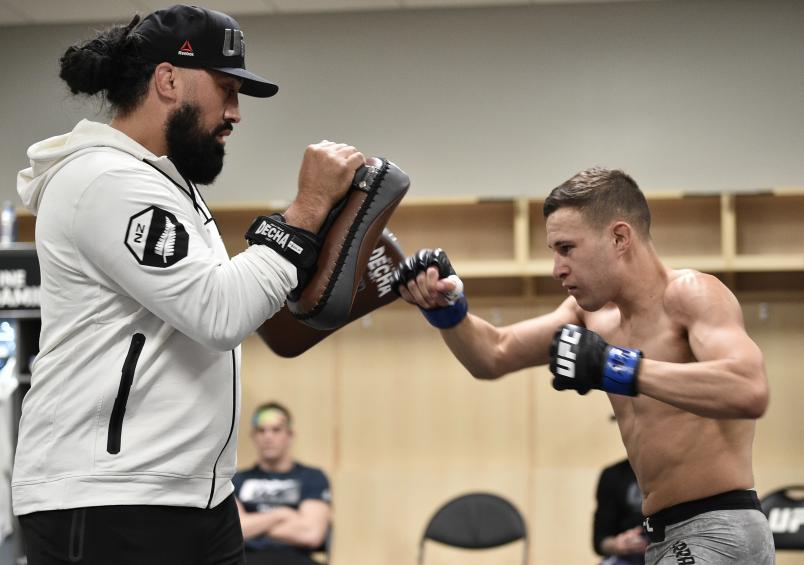 LAS VEGAS, NEVADA - DECEMBER 14: Kai Kara-France of New Zealand warms up prior to his fight during the UFC 245 event at T-Mobile Arena on December 14, 2019 in Las Vegas, Nevada. (Photo by Chris Unger/Zuffa LLC via Getty Images)

The next fighter that will make the walk for CKB on Saturday March 6 is Kara-France, who has suffered setbacks in two of his last three bouts. But in his losses to Brandon Royval and Brandon Moreno, both were great fights that “Don’t Blink” had significant moments in.

It’s been a major priority for Bareman to help Kara-France take the experience from the losses and the wins and turn them into lessons. And not just lessons that Kara-France works on the mats at CKB, but lessons that he applies to his fights in the Octagon.

Bareman is confident that Kara-France truly made that change in the lead-up to this fight and because he did so, fans should expect a more disciplined and more polished version of Kara-France.

RELATED: Kai Kara-France Is Primed To Bounce Back

“There have been some inconsistencies with Kai and there were some lessons we thought that Kai wasn’t taking from the wins and losses and putting them in the bank,” said Bareman. “We’ve worked on taking those lessons and locking them into his identity as a fighter, not just in training. He applied the lessons and he’ll be a better fighter because of it.”

Even though they were tough losses, the defeats didn’t shake Kara-France’s confidence. He feels like he is in as good a position as possible heading into UFC 259.

“Kai is one of those guys who is quietly confident, and he knows his ability. He knows he can beat anybody in the flyweight division when he is having his best day. We have been trying to address why he isn’t having his best day every time he walks out to the lights,” said Bareman. “It excites Kai to fight another guy who is dangerous with submissions so he can right that wrong from the last fight. He was absolutely gutted that he got caught with that guillotine in the Royval fight and now we will see those lessons on display against Bontorin.” 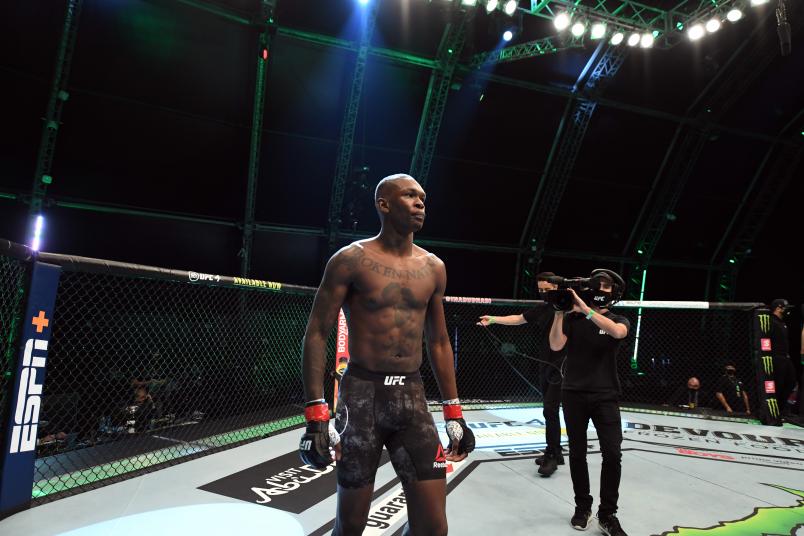 The last member of CKB to make his way to the Octagon will be superstar Adesanya. It’s been a meteoric rise for “The Last Stylebender,” and the middleweight champion has the opportunity to add to his star power by dethroning Jan Blachowicz.

This SuperFight is an opportunity that Adesanya couldn’t pass up and it’s a challenge that Bareman loved for his pupil.

“The beauty of this fight is that moving up a weight class creates new physical and strategic challenges. There are few challenges that are put on a pedestal in MMA and one of them is going up a weight class,” said Bareman when describing why Adesanya was interested in fighting for the light heavyweight belt. “This fight is for the purists who understand the sport; it’s about using the skills Israel possesses and our strategy to defeat the physical advantages of Blachowicz.”

It’s impossible to deny the excitement in the voice of the CKB boss as he talks about the matchup. The challenges that Blachowicz and his team present are something unique and something that he has great respect for.

“I can see through studying Jan that he has a very good set of coaches with him and they will have him ready. They aren’t a team that is in the media a lot and those are the more dangerous coaching teams in the sport,” said Bareman of Blachowicz’s squad. “Jan will be able to put Israel into certain spaces and use phases of weapons to reach Israel. That’s all due to his coaches and the way they have taught him.” 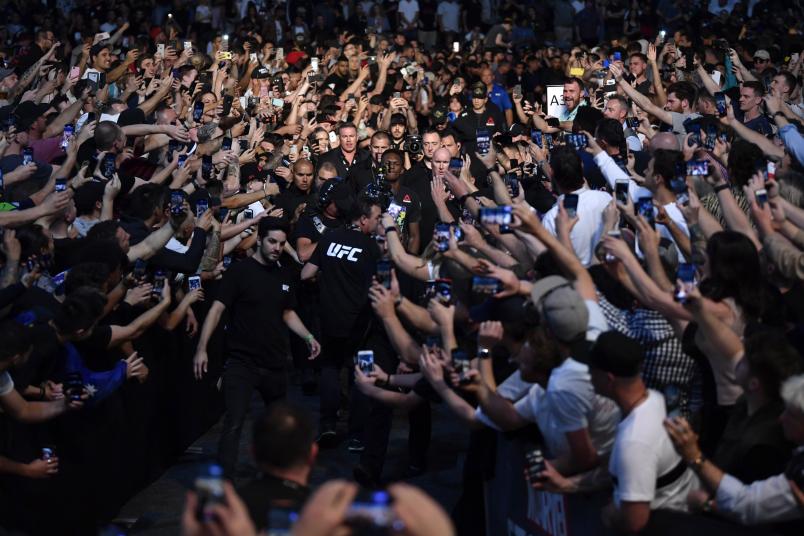 Israel Adesanya of Nigeria prepares to fight Robert Whittaker of New Zealand in their UFC middleweight championship fight during the UFC 243 event at Marvel Stadium on October 06, 2019 in Melbourne, Australia. (Photo by Jeff Bottari/Zuffa LLC)

As for Blachowicz’s “legendary Polish power,” Bareman doesn’t see that as the Polish star’s biggest weapon. It’s his experience and unwavering confidence in his abilities that will make him Adesanya’s toughest test to date.

“Jan is a scary fighter because he is quiet. He doesn’t show you much, he doesn’t have hoopla, he isn’t wearing his heart on his sleeve and he doesn’t show you his cards,” said Bareman. “He is simply just supremely confident in his skills and his ability to beat Israel. That’s dangerous. To have true confidence like that is dangerous. It will lead him to push through adversities that Israel’s other opponents weren’t willing to push through. Jan will make a proper attempt to close the distance and fight his fight.”

And while Adesanya is definitely more outspoken than Blachowicz, Bareman has seen the 31-year-old Nigerian-born champion establish himself as one of the biggest stars in the sport by staying true to himself.

MORE UFC 259: Preview Every Fight On The Card | Significant Stats

“I was asked years ago that if the fame and fortune would change Israel and I answered honestly at the time that I wasn’t sure. But now if I look back on it years later, I can say that it hasn’t changed him at all,” said Bareman of Adesanya. “Even with all the stardom and fame and fortune he’s still the same person. He’s just one of the guys, but he has unique gifts and qualities.”

“Israel has an excellent cardio system, a long reach, he’s very strong, explosive, has a unique ability to learn super-fast, but behind all of the physical traits, Israel has an unrelenting belief in himself and what he is going to do. It cannot be broken.

“In all my years, the only person I’ve studied with the same type of confidence in who they are to the point that Israel is at, is Muhammad Ali.”

City Kickboxing vs everyone!
It’s cuz of these man and their efforts that I am here today. Without them my skill set would not be what it is today.
I am the canvas, these are the artists 🎨 pic.twitter.com/8bAWCG6wz7

To hear Bareman compare Adesanya to the great Muhammad Ali, should be a shock, but it isn’t. Bareman sees how Adesanya carries himself every day and his passion to be the best drives him to deliver inside and outside of the Octagon.

UFC fans have only been tuned into the Adesanya show for just over three years, where he decimated the competition at middleweight. Defeating Rob Wilkinson, Marvin Vettori, Brad Tavares, Derek Brunson, Anderson Silva, Kelvin Gastelum, Robert Whittaker, Yoel Romero and Paulo Costa. That resume is insane for a fighter with only nine UFC appearances.

But when you think about what he’s accomplished in such a short time and who Adesanya is, it’s not far-fetched for Bareman to see just how great Adesanya is and can be. A victory over Blachowicz at UFC 259 will make him just the fifth fighter in UFC history to simultaneously hold two divisional titles.

How To Order UFC 259 In Your Country

It’s a fight that will set Adesanya’s legacy apart from many of the best fighters in UFC history and it’s an opportunity that Bareman believes Adesanya will use to cement his legacy.

UFC 259 is the perfect way for Bareman and CKB to start off 2021, another chance to showcase that they are still one of the premier powerhouse gyms in MMA.

Bareman can hardly wait for what the team will accomplish this year.

“We are at the pinnacle of the sport. That means we are getting bigger and better and that means more pressure. For me and my coaches, the pressure is trying to widen the gap again,” said Bareman. “For 2021, what I see is more pressure and triumph, coming out on top through a lot of big fights and leaving with diamonds, and that starts at UFC 259.”